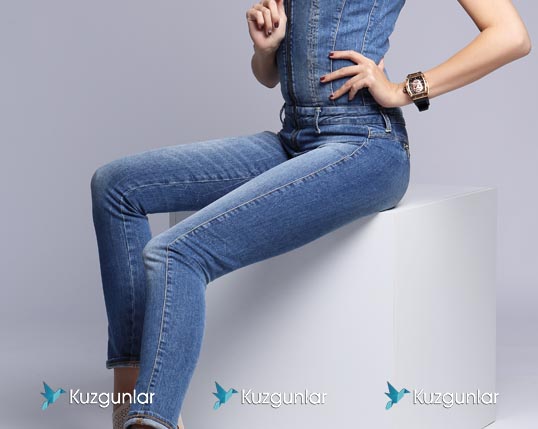 ABOUT DENIM AND JEANS.

Every day the number of automobile is increasing. Automobiles make up approximately 74% of the total motor vehicle production per year in the world.

Denim is a type of cotton twill textile, in which the weft passes under two or more warp threads. Warp threads of denim fabric are dyed in indigo while weft threads remain plain white. That is why denim is blue on the one side and white on the other. When used for jeans, denim is turned blue on the outside and because of the way it is made it fades in a characteristic way.

Original denim was dyed with dye from plant Indigofera tinctoria. Modern denim is dyed with synthetic indigo. Denim is often dyed with indigo and dried many times over to get a stronger color that will not fade quickly. After the denim is made into clothing it as most often washed to make it softer and to reduce or eliminate shrinkage. Denim that is not washed is called dry or raw denim. Denim fades in time and gets a worn out look which is often desired as a fashion detail. Some denim is artificially distressed so a worn-out look can be got even before wearing. Denim that is not made of pure cotton but also has an elastic component (most often elastane) is stretch denim. Besides indigo dyeing, denim can be colored with sulfur dyeing which is used for dyeing of denim in colors other than indigo.

Word “denim” comes from fabric "serge de Nimes" made in France city of Nimes from where it originates. It has been used in America since the late 18th century, colored blue with indigo dye to make blue "jeans", a type of cotton pants. Jeans come from "Genes" - a name given by French to Genoa. Jeans are named after the city of Genoa in Italy, a place where cotton corduroy, called either jean or jeane, was manufactured. Levi Strauss came from Germany to New York in 1851 to join his older brother who had a dry goods store. . Levi Strauss, a businessman, and Jacob Davis, a tailor, supplied miners with denim pants that were made from durable material and reinforced with rivets at the places where pants tended to tear which prolonged life of pants. This marked the beginning of the legend of jeans and brand Levi Strauss is still hugely successful today.

Denim was first used for clothes worn by workers because of its high durability. Then it became widely popular in the 1930s when Hollywood started making cowboy movies in which actors wore jeans. With the beginning of the World War 2, production of the jeans drops but world meet denim when American soldiers started wearing them when they were on the leave. When the war ended, other companies that made denim started appearing like Wrangler and Lee.

Young people started wearing denim in the 1950s a mean of rebellion. This fashion was also inspired by Hollywood with by Marlon Brando with his 1953 film “The Wild One” as well James Dean’s movie “Rebel Without a Cause” from 1955. Some public places like schools and theaters banned jeans because of what they symbolized. Denim crossed from counterculture to fashion in the 1960s and 1970s when manufacturers started to make different styles of jeans.

Jeans marked culture of the last 140 years probably more than we think. They were first working clothes, then symbols of disobedience only to become fashion items.

Jacob W. Davis and Levi Strauss teamed up from necessity and created an item that will influence cultural groups for years and even today - they created jeans. Here you can learn more about jeans inventors.

Did you ever asked yourself how blue jeans are made? Or even zippers? Now you have a chance to find out. Read about methods of manufacturing of jeans and zippers.

GET A FREE QUOTE

Please fill this for and we'll get back to you as soon as possible!